Posted in Family Portraits
Since I didn’t shoot anyone’s Christmas photos this year, I decided to post the ones I did for me and my fiancé, Sarah. Because these are my own pics, I’d like to share how these shots were achieved using complex lighting and a little forethought.
First, let me show you the pictures… 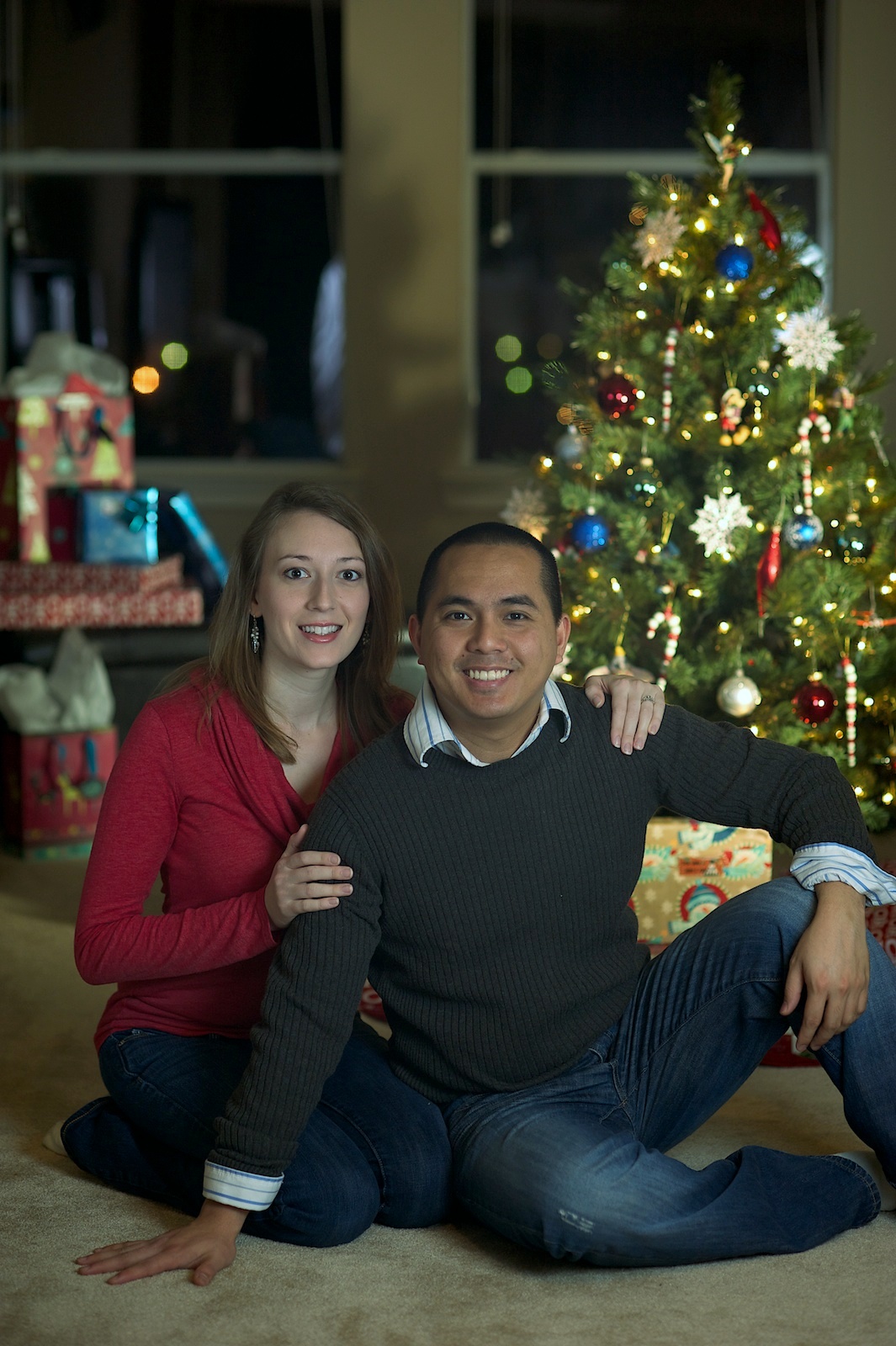 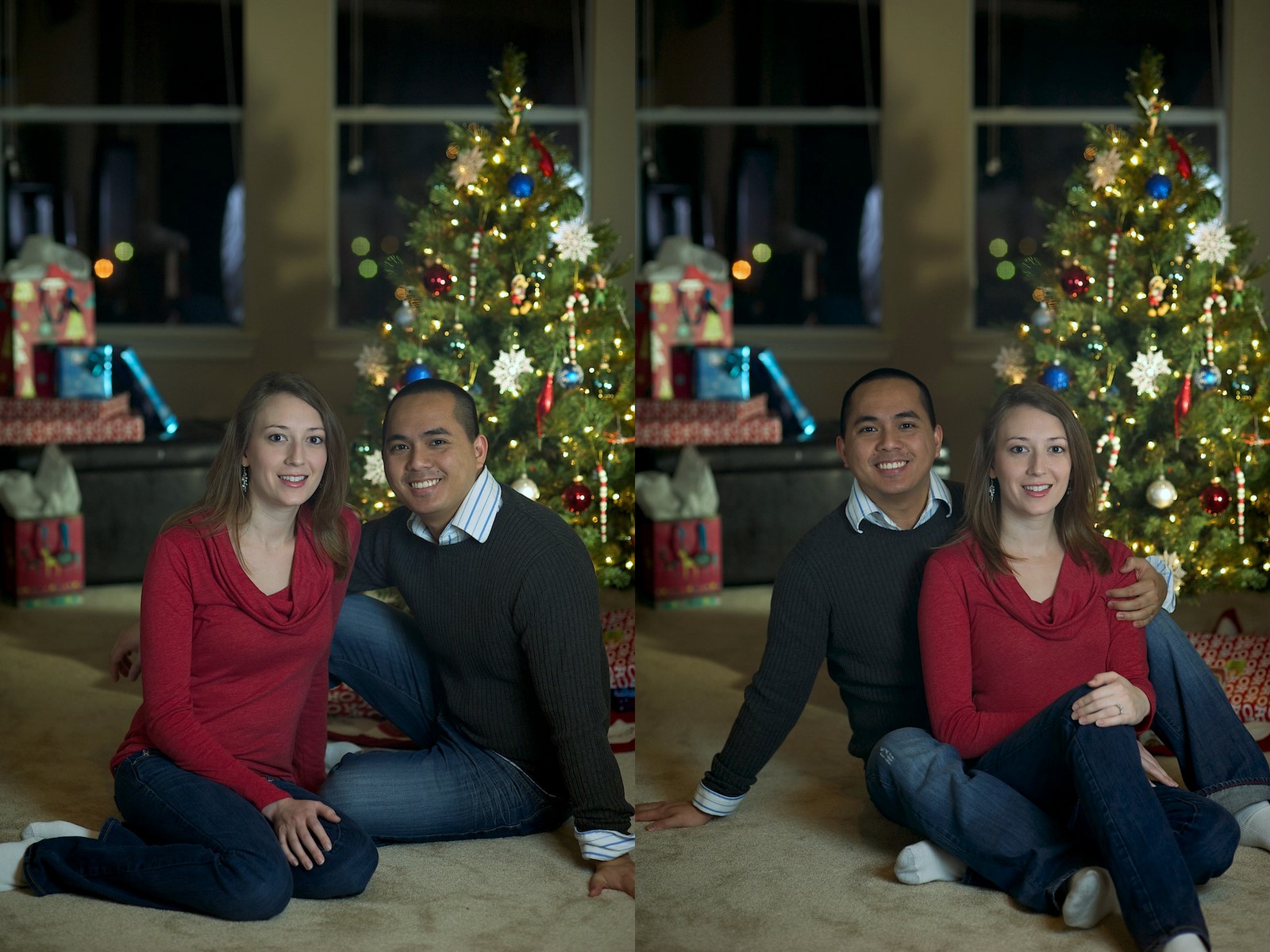 Let me explain certain elements that at first may not be noticeable, but actually played important roles in achieving the look and feel that I wanted.
Notice the stack of presents on the left of the picture. Those were strategically positioned and lit by it’s own flash, which I will explain shortly.
You will also see blurred circles of light called “bokeh” outside through the windows. While I was setting up, my camera was initially sitting too low and you couldn’t see those lights outside. I had to elevate my camera so that those lights would come into view. 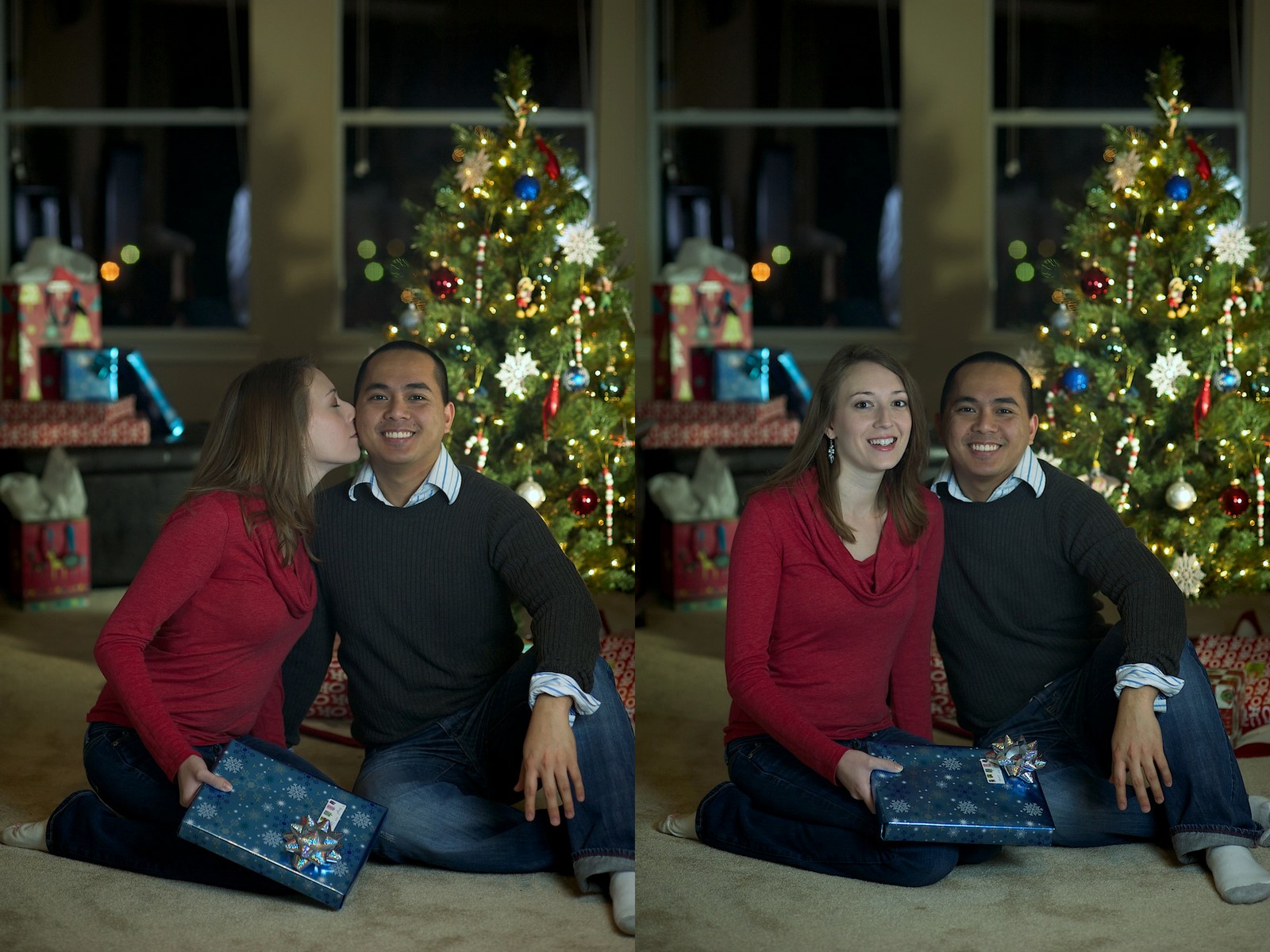 Next, you will see that the (little) Christmas tree is nicely illuminated, also by it’s own flash. Without it’s own flash, you would only see little dots of christmas tree lights. Also great is the shadow it creates on the pillar between the windows. This adds drama to the scene and gives the illusion of a fireplace in the room.

To really give it that fireplace look, I added a yellow gel sheet over the flash because they usually put out a cooler blue light.

Lastly, I illuminated Sarah and I with an umbrella off to the camera’s right. This angle creates shadows on the right side of our faces. To fix this, I placed a reflector opposite the main light to bounce off some light and fill-in those shadows.

Above you will see my main light, the umbrella. Then on the left is the reflector.
Sitting on the side table by the lamp is the second flash to light up the tree. Notice that I use black flexible foam sheets to flag the light and prevent it from spreading all over.

And no, that tree isn’t normally in the center of the room. Neither is the ottoman on the back where the presents are. Everything had to be moved around. It’s a production set that takes time, planning, and a lot of adjustments just to get it right. The more lights you use, the longer and more complex the setup.

On the couch, close to the tree, is a third flash used to light up the stack of presents on the back left of the room. Again, I flagged it with foam sheet to concentrate the beam on the presents. Doing otherwise would light up the entire back wall and get rid of the Christmas tree shadow created by the second flash.
Lastly below is a telling photo of what this shot would have looked like with no complex lighting. And it doesn’t matter how nice and expensive my camera is, there is only one culprit for this result – on-camera, direct, forward flash. Also known as the pop-up flash. That’s why you will NEVER see me use it.

MERRY CHRISTMAS EVERYONE!!!
UPDATE: I spent Christmas Eve at my uncle’s house and took a couple pictures there, too! Food was good!

I shoot portraits, too!